From July 20-24, 23 high school and college students will take part in SEA’s 7th Annual (and first-ever virtual!) Citizenship Tour. These civically-minded students will spend the week meeting and speaking with leaders in government, policy, nonprofits, journalism, and more. Our high school participants hail from 12 SEA member programs across the country. This week, our students have begun gathering to prepare for their meetings and to get to know one another. See below to “meet” a few of our Tour participants and who they’ll be talking with next week! 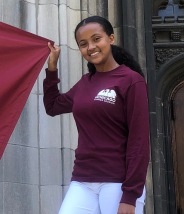 Issue you are passionate about: Climate change has proven to be a political, environmental, and social issue in the United States, and it is crucial that politicians and citizens across the nation understand the current conundrum. As a nation, we have failed to take appropriate action and just this past year the carbon emissions in the world were the highest in all of human history! That fact is crazy, and should have been enough to spark change but it hasn’t. I am excited to share my ideas with the members of the Tour and discuss pressing topics as such.

One word that describes you: Passionate. I love everything I do and usually spend lots of time trying to understand and contribute in the best way possible.

Issue you are passionate about: An issue that I’m passionate about is immigration but specifically DACA. This topic is important to me because I have family members that are here because of DACA.

One word that describes you: Motivated

Issue you are passionate about: The mortality rates of Black women during childbirth and why they are so high compared to other races of women.

One word that describes you: Ambitious

Issue you are passionate about: The juvenile prison system reinforces criminal behavior rather than rehabilitating incarcerated children by not protecting them in the cells from other adults, punishing them ever more than others, and not giving them the help they deserve trying to become a better person. Not only has this opened my eyes to the juveniles being put in prison but to the percentage of people in prison are African Americans.

One word that describes you: Considerate