Today’s Tour conversations covered all things news media and journalism. Our first meeting was with Senior Director at NBC News Brett Holey, Anchor Lester Holt, and Senior Vice President of NBC and MSNBC Rashida Jones. Brett, who directs breaking news, prime time and political programming and oversees directors, production and projects for network news, has been involved with the Tour since its origin in 2014. He spoke with the group about the importance of being an active consumer of media and introduced our students to his colleagues Lester and Rashida. 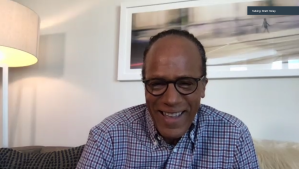 We were thrilled to have the opportunity to speak with news anchor Lester Holt. He talked about the importance of leadership and the value of diversity in the newsroom, and answered questions about Justice For All, his series on criminal justice reform, and moderating a presidential debate in 2016, among other things. Following our conversation with Lester, Rashida Jones spoke to our Tour students about her work as executive producer of breaking news and major events for NBC News and MSNBC and manager of MSNBC’s daytime programming. She reflected on how discipline and public service have been guiding principles for her career, and encouraged students to do what they’re passionate about.

Our second meeting of the day was with Pulitzer prize winners from The New York Times Kathleen Kingsbury and Brent Staples. Kathleen is the Acting Editorial Page Editor at The Times. Brent is an editorial writer and has been member of the New York Times Editorial Board since 1990.

Kathleen shared about how the publication operates, the difference between the news and opinion sections, and her notable work on labor issues. The students asked about her perspectives on a variety of topics, ranging from gun safety to reopening schools during the pandemic. The group also touched on how The Times decides which opinion pieces get published.

During our time with Brent, the group discussed some of his most notable works such as Just Walk on By: Black Men and Public Space, and asked questions about his decades of experience writing on race, cultural issues, and education. We’re grateful to Brent and Katie for sharing their time and insights with us!

Our students finished the day with lots of advice and information to reflect on and are looking forward to tomorrow’s meetings with Former Massachusetts Governor Daval Patrick and Nisha Agarwal of the International Refugee Assistance Project.