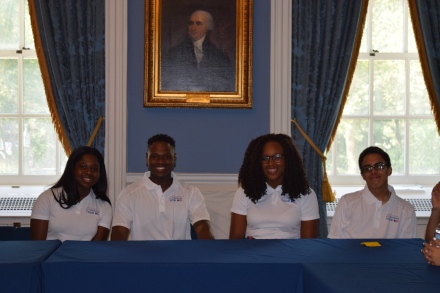 After a whirlwind 3 days in New York City, our Tour participants had a chance to reflect on the exciting experiences in the Big Apple. Here’s what they had to say about…

“The discussion about the education system really caused us to think more critically of those issues. We were able to really think about the school system and how KIPP is working towards tackling all these issues. We hope this will cause a chain reaction that will benefit all schools throughout the nation. As public school students ourselves we would like see a lot of what is happening at KIPP schools, happen at our own schools. We are grateful to talk to Richard Barth, who is such a revolutionary figure in our nation’s education system.”

“We were inspired by their candid portrayal of the life of a journalist; especially in one of the world’s most circulated newspapers. Science, business, and lifestyle were the three areas of concentrations for the journalists on the panel. Each one expressed the amount of passion they have in the work they do. We were able to receive helpful insight into the life of a journalist; however, most importantly we were able to receive inspiration to pursue a career in an area that interest us and learn how journalism impacts our democracy.”

“We explored the sets of Saturday Night Live, The Jimmy Fallon Show, Late Night with Seth Meyers, and Lester Holt’s Nightly News. Our objectives were to learn about the production that goes into these shows and discussed topics that affect daily news.

Our discussion with Lester Holt was terrific. As the first African-American national news anchor,  he expressed the importance of taking initiative in creating a purpose for his career. An example of skills that he gained in his profession is having the ability to think on his feet. In his line of work, news anchors often have a script to go by, but in the case of breaking news, he uses techniques that he learned in his early years of journalism. Looking back at our trip to NBC studios, we learned that getting to a position that Lester Holt holds, requires hard work, experience, and determination.”

Among arriving to the museum, we had a variety of mixed emotions. We have all learned about the tragedy that is 9/11. However, so few of us actually have had the chance to visit and experience it on a very up close and emotional level; as those who have actually been involved, and are currently still experiencing these emotions due to the post effects of such a historic and tragic event.

The museum showcased leftover pieces from the incident as well as digital recordings that allowed us to be mentally and emotionally invested in the museum. Things that made us tap into and fully engage in the museum were the pieces of steel that were recovered from the twin towers. It made us realize that even after the destruction from the event, it still remains with us and others. Another aspect that created a takeaway for many was the “Survivor Stairs.” This was the way that many people escaped Tower One, as it was minimally damaged. The museum humanized 9/11 because even though we are taught in schools about the tragic event, it is never perceived as real as those who lived it and were involved. The 9/11 museum made us appreciate what we have.

During the informative meeting with Commissioner Agarwal, she talked about her early life and how it influenced her passion for activism especially immigration as she comes from a family of immigrants. In the early stages of her career she completed service work in India to help a group of women whose homes were being destroyed by the government. From there her passion for activism grew even larger and she sought out ways to help people. Later in her career she joined Mayor Bill de Blasio, as the commissioner of immigration affairs and kick started a program called IDNYC. This program provides an identification card to immigrants in New York City to help with basic needs such as jobs and healthcare. IDNYC has been able to provide over a million identification cards over the past two years and has been a big help to many families. Commissioner Agarwal continues to work to help families in New York City.

Our discussion with Commissioner Agarwal was very informative and inspiring. Her activism has impacted so many families especially given the challenges that they face with this new administration. We enjoyed learning from experiences and hope that one day we can impact many lives as she has done.